The Case for a High-level Kernel-Bypass I/O Abstraction

After chatting with people at HotOS, I was inspired to write this blog post summarizing my HotOS paper. At a high-level, the HotOS paper advocates for a new high-level I/O abstraction for kernel-bypass.

In the past, kernel-bypass has been associated with giving applications low-level access to devices. We argue that modern kernel-bypass applications should use a high-level abstraction instead, provided by a user-level, library OS that runs alongside the application in its address space.

Existing kernel-bypass abstractions (e.g., DPDK, RDMA) are low-level because they expose hardware features and limitations to applications. As a concrete example, we will look at sending data of arbitrary size and sending data at arbitrary speed with DPDK and RDMA. Note that both are easy with a high-level interface like POSIX sockets, which let applications send data of any size and at (almost) unlimited speed (until the OS runs out of memory for buffering).

DPDK senders are limited to the max network packet size, and DPDK provides no flow or congestion control, so the network or receiver might discard packets. RDMA senders are limited to the receive buffer size posted by the receiver; the receiving NIC will discard larger packets. RDMA implements congestion control (through PFC or other means) but not flow control, so the receiver must post sufficient receive buffers fast enough; posting too many buffers wastes memory, not posting enough buffers causes the receiver to discard packets.

Every RDMA or DPDK application must work around these two hardware limitations, and most of them do it in the same way. For example, most DPDK application will use full networking stack (e.g., mTCP) to break up messages into network packets and implement congestion and flow control. Almost every RDMA application implements an RPC messaging mechanism that coordinates message sizes and when the sender should stop sending because the receiver is running out of buffers.

This functionality would normally be provided by an OS, but low-level kernel-bypass interfaces instead force every application to re-implement it. At the end of the day, most kernel-bypass applications are still looking for a high-level OS interface but without the overhead of going through the OS kernel.

Benefits of a high-level interface

Ease-of-use: Application programmers do not have to implement OS functionality, like flow control, which requires them to understand the hardware limitations and features (e.g., that DPDK needs a full networking stack but RDMA just needs flow control).

Portability: Application work with both DPDK or RDMA devices without modification. Today, building an application that works across RDMA and DPDK requires supporting two different interfaces and implementing different OS functionality in the application since RDMA NICs handle congestion control but not flow control, while DPDK NICs do not implement either. Current Intel NICs do not support RDMA, thus do not implement congestion control, so applications using RDMA for kernel-bypass cannot run on them.

Flexibility: An interface that hides hardware limitations and features lets OS functionality move between the device and the CPU without modifying the application. NICs continue to gain networking capabilities, so DPDK NICs might eventually provide congestion control but the DPDK interface makes it impossible to use because the application is already using a full networking stack. As devices evolve, only the library OS has to change functionality, rather than every application.

We ran an experiment with the Redis benchmark on CloudLab, which has a 25Gb network with Mellanox CX-4 NICs. The first bar is unmodified Redis performance. The next three bars are performance for Redis ported to the Demikernel interface. The first bar is simply the Demikernel interface with no kernel-bypass, still going through the Linux kernel on every I/O. The next two bars are kernel-bypass with RDMA and DPDK. 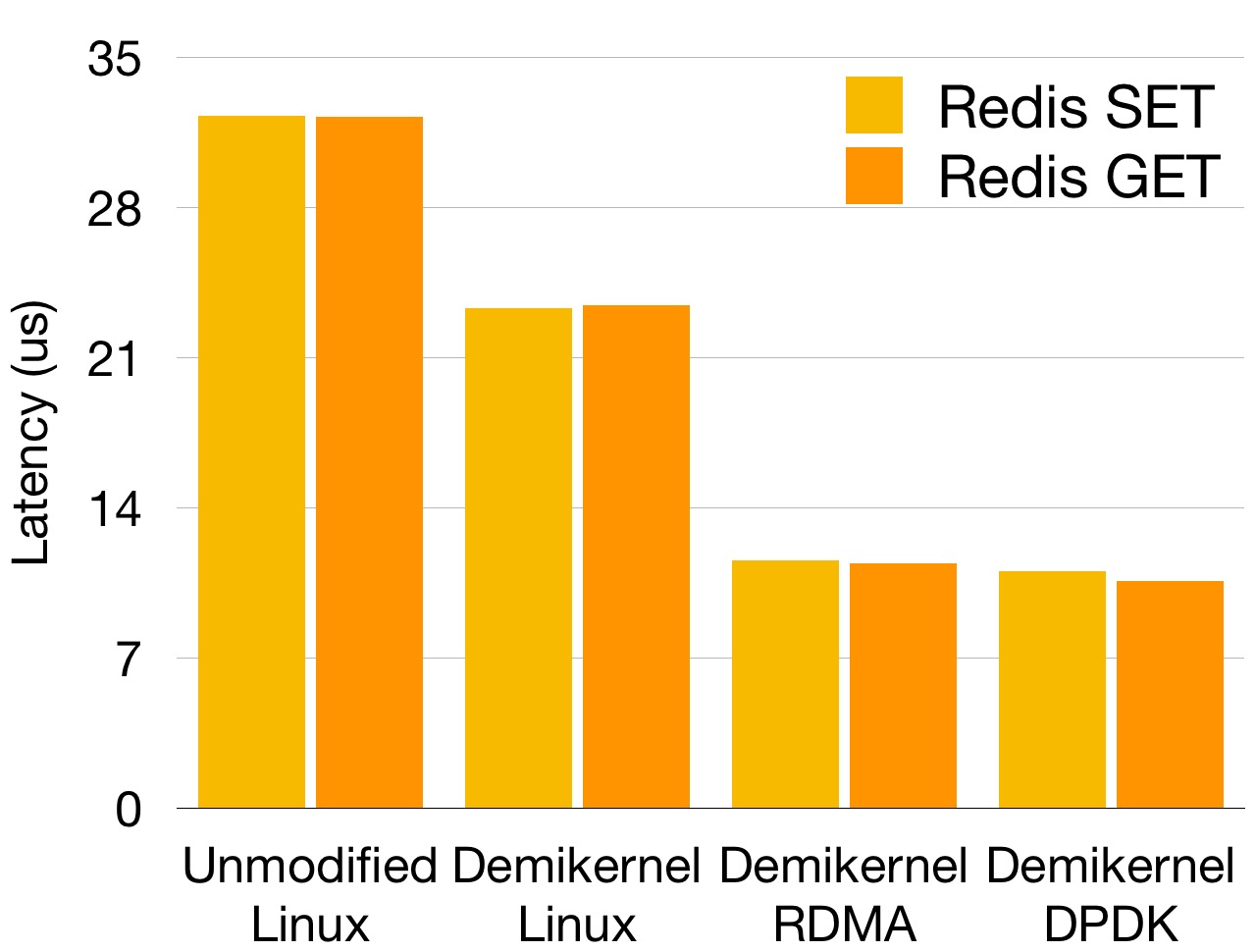 Note that 30% of the overhead from the Linux kernel comes from inefficiencies in the interface, while bypassing the kernel using RDMA or DPDK provides another 30% decrease in latency. For this experiment with the Redis benchmark, 60% of the latency comes from the OS kernel and its interface!

Datacenter applications, which spend a signficant portion of their time processing network and storage I/O, will no longer be able to afford going through the OS kernel on every I/O operation. However, that does nto mean that these applications want low-level access to devices. Instead, we need a new and efficient high-level I/O abstraction for kernel-bypass.

This is a work in progress as I continue the Demikernel project. If you have comments or questions, please email me at irene.zhang@microsoft.com.